Kirumi and Kuttram Kadithal both the Tamil films clashed to the box office on 24th September and they are varied in Genre and got decent opening on the First Day. Kirumi is the  Tamil action thriller film directed by Anucharan features Reshmi Menon and Kathir in pivotal role. It’s a realistic drama with elements of a psychological thriller. 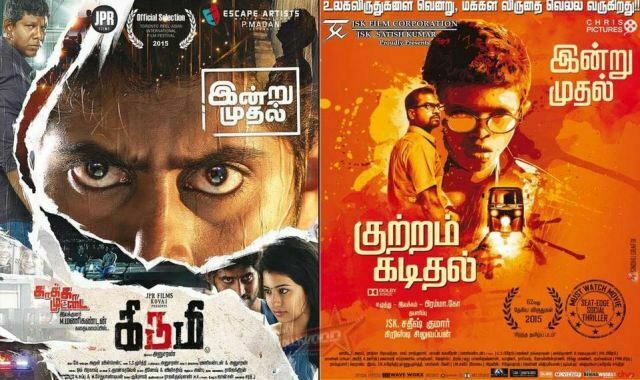 Kirumi story plots A selfish youth is in search of a job. When he gets a job, he gets into bad company as well. The story narrates the problems faced by him due to the bad influences and this will be a city based thriller. The heroine works in an export company.

On the Other side Kuttram Kadithal is the Drama film directed by Bramma.G features Master Ajay, Radhika Prasidhha in pivotal role. The film explores an interesting spectrum of lifestyles and how one unexpected incident influences people from diverse lifestyles.

Both The Films are well reviewed by performance, Narration, Music and everything was full fledged according to the genre. Check out the reviews and Ratings by critics below.

Kannan ‏@TFU_Kannan
#KuttramKadithal & #Kirumi getting super reviews. Really sad that I’m out of town 4 this weekend… Can’t wait to catch up both ASAP!!

Madrasi ‏@MadrasMemoirs
#KuttramKadithal is one of a kind movie. Solid social thriller. Must watch!

jaga ‏@jaga_jj
#KuttramKadithal is awesome. Everyone must watch this film at theaters. hatoff bro director #bramma and whole crew.

Dhananjayan Govind ‏@Dhananjayang
Congrats to @JSKfilmcorp @NaanChristy #Bramma G & team for the kind of appreciations you are getting for #KuttramKadithal …Well deserved??

karthik subbaraj ‏@karthiksubbaraj
#KuttramKadithal – Been waiting for its release..Please don’t miss to watch one of the finest and purest film, in theatres..Go right away 🙂

Kavinraaj ‏@Kavinraaj22
Scintillating! Dialogue n the messages from the film will make us to think a lot. Must watch movie. #KuttramKadithal @bramma23 @radprasidhha

By following the both the films reviews and Ratings it looks as the both the films really flying high at the box office and it created the trouble on parallel released three more films named Unakenna Venum Sollu, Jippaa Jimikki and Kadhal Agathee. Box office collection of Kirumi and Kuttram Kadithal Expected good but it could have been more great if they released without clash. Total Box office Business will be affected for sure as both the film Kirumi and Kuttram Kadithal promises excellency.

Audience Occupancy was Divided among two films because of the high standards of each. First Weekend publci rush would be more compared to the Opening days. Based on the Positive reviews and Ratings by Viewers. Box office Bull Team Gives the 4 Stars out of 5 to both the films.