Bollywood Heartthrob Dashing Shahid Kapoor who is judge of Jhalak Dikhhla Ja Reloaded Season 8 Promoted his upcoming film Shaandaar with Actress Alia Bhatt on the Dance floor of Jhalak Reloaded. on 10th October its the Grand Finale time and one will be selected as the Jhalak Reloaded Winner on year by public voting.

Shahid and Alia Danced together on the Shaandaar Title song on the floor of Dance Plus. Shaandaar Movie is the Romantic Comedy film, fans are keenly waiting for it after the Trailer release. Bollywood cute on screen couple took time to promote and made the Khalak night even more shaandar. All the Jhalak Top 4 Finalists and Judges have gala time with this Shaalia Stars.

In Super Finale Celebration Shahid and Alia Jodi had Blased Dhamaka on the Floor. See the Shaandaar Dance Performance Video by Shahid and Alia Together. They rocked the floor and impressed the fans. Shahid Spotted in Red Blazer, Black Pants and Alia grab the Attention in sexy short top. 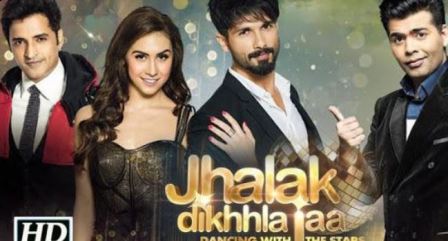